In a Nutshell: Online arbitration platforms can be biased, inefficient, and costly for businesses to implement. And in the decentralized cryptocurrency space, scammers may take advantage of those without contracts or escrow services. Kleros is a third-party arbitration solution for cryptocurrency transactions founded by entrepreneurs well-versed in crowdsourcing and blockchain technology. Built on the Ethereum blockchain, Kleros uses game theory to incentivize anonymous jurors to rule on disputed smart contracts — which builds accountability and trust while saving time and money.

In the offline world, payment disputes between the two parties are often solved — at great expense — through the legal system or small claims court. Online, marketplace sellers and buyers can typically turn to a platform’s dispute resolution center for relief. Consumers hope the rulings in online disputes are fair, but they worry that a certain amount of bias on the part of the arbitrator could be involved.

On centralized marketplace platforms, it may be the company itself that may benefit more from ruling in favor of the fee-paying party (the seller) over the buyer. Decision-making can also fall to employees who wear multiple hats and may judge before carefully examining all the evidence.

Kleros was designed to meet the challenges of both fairness and enforcement in online payment disputes. The platform is an Ethereum-based decentralized application (DApp) that uses smart contracts and crowdsourced jurors to provide fair, fast, and affordable dispute resolution for the digital marketplace.

“Once parties have agreed to a contract, be it on the blockchain or elsewhere, they’re legally bound by contract law,” said Stuart James, Project Manager for Kleros. “International arbitration lawyers have come to the same conclusion. Although this is a brand new field and it’s untested, it should be a legally backed process.”

Kleros juror decisions tend to be more accurate and less biased than those of centralized dispute resolution platforms because it incentivizes the anonymous arbitrators. And, since Kleros is fully decentralized on the Ethereum blockchain, enforcement of dispute rulings is also less complicated and costly.

“In a traditional world, a sheriff’s office or bailiff may deal with enforcement, which can be very costly and problematic,” Stuart said. “Kleros has negated all of that. Because it’s on the blockchain, enforcement is done automatically by a smart contract. So, it’s far more efficient and cheaper.”

And studies have shown that the Kleros model is working. “Jurors are properly incentivized, and we’ve found that it’s creating correct decisions,” James said.

As more business interactions shift to unregulated online marketplaces and platforms, the Kleros decentralized dispute resolution system has many applications to fairly and efficiently settle conflicts while building trust and ensuring accountability.

Kleros was co-founded in June 2017 by Federico Ast and Clément Lesaege. Federico, who is also the company’s CEO, had previously formulated the concept for Crowdjury, a P2P court framework for the connected digital world designed to be transparent and self-sustaining.

“It’s about how you can arbitrate online with anonymous jurors or crowdsourced jurors and still provide high-quality service. It’s the same idea as Kleros, but without the blockchain,” James said.

Lesaege, the company’s CTO, is the “genuine genius” behind its blockchain technology, according to James. Kleros works on the Ethereum blockchain, which stores smart contract evidence and uses its cryptocurrency, ETH, to pay jurors an arbitration fee. The company also formulated its own token, known as Pinakion (PNK), that serves as an incentive for jurors to vote honestly in each case they judge.

The Kleros incentivization model is rooted in the concept of Schelling Points, formulated by game theorist and Nobel Memorial Prize winner Thomas Schelling, who created paradigms for conflict resolution in the 1960s. Game theory motivates people to collaborate to protect their interests or gain a reward.

“If you put up some money, you’re very likely to vote correctly. If you didn’t have any money involved, you could vote whatever way you wanted; it wouldn’t matter,” Stuart said. “The same incentives hold true for us. If a party puts out a certain amount of stake — in our case Ethereum — and another one does the same, it’s unlikely those parties will act maliciously unless they want to lose money,” Stuart said.

Combining a crowdsourced jury system and blockchain technology with gaming theory, Kleros provides a third-party solution for quickly and affordably resolving online disputes using both factual evidence and human judgment motivated to rule in favor of that evidence.

Kleros Court is designed to efficiently and fairly settle disputes between parties, and this starts with assigning anonymous, non-company jurors who join the General Court to sub-courts based on their skills and expertise. Jurors stake their PNK, the Kleros token. Every PNK a juror owns increases the chances of being drawn as a juror for the next case.

“You stake your PNK as jurors,” James said. “The more PNK you have, the more chance you have of being drawn as a juror on a case. If you stake 1 million PNK and someone else stakes 1,000, you have a far higher chance of being drawn.”

Once Kleros draws jurors, a percentage of their stake is locked. For example, in a case with three jurors, each might have 3,000 PNK held until the dispute has ended. Voters gain money for voting unanimously based on the evidence — and aren’t allowed to see how others voted.

“We don’t call it voting honestly; we call it voting coherently. We use the word coherently because in many cases, the evidence is obvious, and it’s not in any juror’s interest to vote against the evidence. There’s no reason for a juror who doesn’t know either party to vote any other way.”

Kleros Project Manager Stuart James spoke with us about how the platform incentivizes jurors.

If all three jurors choose the same resolution, each receives a small Ethereum arbitration fee, which comes from the losing party, and Kleros returns their 3,000 PNK stake. If, however, one juror votes out of line with the other jurors, that juror is penalized by not only missing out on the arbitration fee, but also losing his or her personal PNK tokens locked in the case.

“It would be split between the other jurors,” Stuart said. “The incentive for jurors is that if they vote coherently with the crowd, they don’t lose any PNK and they get paid in Ethereum. If one of three or five do not vote with the majority, they’ll lose their PNK and lose out on the Ethereum arbitration fee which acts as a double incentive to make sure you vote coherently.”

Since Kleros stores the evidence in smart contracts, it tasks jurors with making decisions in no more than three days. And the results are enforced automatically, which drastically cuts expenses — and time — for everyone involved.

The Kleros white paper explains the organization and rules of the jury system in greater detail.

Kleros found its first use case in providing arbitration services while working on its Mainnet-based Token Curated Registry — a large cryptocurrency exchange with gamified incentives. Although crypto is a decentralized form of payment, many exchanges still do not have an unbiased, cost-efficient dispute resolution service in place.

“We offer a service focused purely on dispute resolution,” James said. “You don’t need to build dispute resolution, which is a costly process. We’ve already built it. They just have to integrate it, and if they get any disputes, they come to us.”

Starting in May 2019, Kleros will offer escrow smart contracts. Much like traditional escrow systems, users will deposit cryptocurrency funds as a good-faith promise of payment. The critical difference is that, if a contract between two parties goes into dispute, Kleros jurors will rule on it. 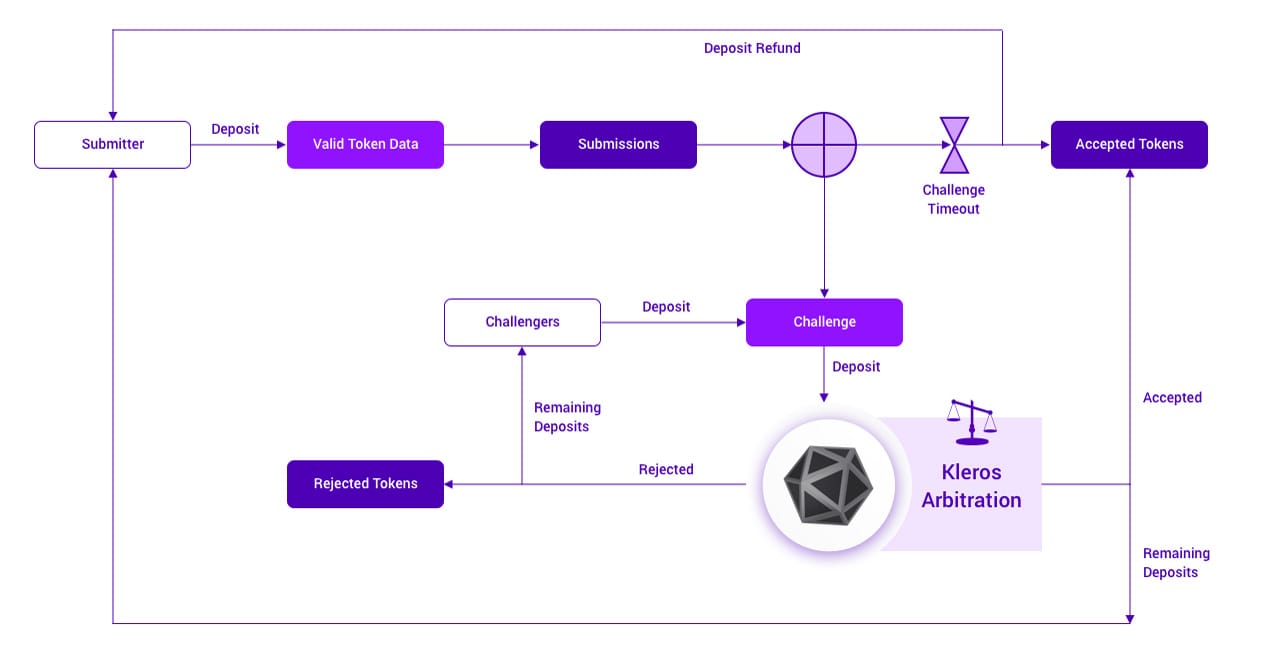 The Kleros arbitration process is thorough and requires jurors to have a stake in the proceedings.

Through escrow, Kleros addresses the issue of scams, a challenge of the unregulated cryptocurrency space that plagues not only exchanges, but ecommerce platforms, crowdfunded startups, freelance contractors, and other types of P2P business transactions on the blockchain.

“Within the blockchain space now, there’s no escrow solution, but there are a lot of scammers. Without a dispute resolution mechanism, they can get away with fraud,” James said. “It’s happened to a lot of companies. With escrow, Kleros is aiming to clean up the blockchain market.”

Besides protections and accountability, Kleros escrow also takes less of a cut in fees than most traditional freelance platforms.

“There are close to 37 million freelancers just in the U.S. And the freelance platforms can be massively undercut because they take up to 25%. In the blockchain space, a freelancer could pay a 1% fee,” James said.

Due to these differences and the overall trend toward digital, person-to-person payment models, Kleros sees the freelance sector expanding, and continually shifting away from traditional platforms over the next decade.

According to Forbes, the world could have as many freelancers as traditional workers by 2027. And Kleros expects that many of those freelance contracts will move to blockchain and escrow to ensure the integrity of the payment process.

Only two years in, Kleros is revolutionizing the online dispute resolution space, both online and offline. The platform not only benefits disputing parties, but it is also advantageous for the anonymous, crowdsourced jurors who participate in Kleros Court.

“This is reasonably — and, in some cases, extremely — profitable for jurors. A few of our jurors have made close to $1,000 worth of Ethereum while spending roughly an hour to judge a case. Even in the small disputes, you’re looking at making $7 to $10 for a 30-second transaction,” Stuart said. “We’re hoping that these types of financial gains will not only bring about a more coherent and solid resolution process but also provide jobs to people in the future.”

While real-world justice for payment disputes can be time-consuming and costly, justice in the digital economy is often nonexistent, unclear, and biased at best. Kleros meets those challenges with incentivized third-party arbitration that holds both business entities and individuals accountable.

“The cryptocurrency space has been around for a while, but it’s still pretty much the Wild West. We’re trying to clean that up,” Stuart said. “Kleros is based on the idea of bringing trust and accountability to this Wild West.”