Americans Over 65 Know What Bitcoin Is

The last group presents the most exciting results, in that they are a group not commonly associated with technology or cryptocurrency at all. However, only 12% of that group hadn’t heard of bitcoin. Additionally, at least 20% of this group was “somewhat” familiar with bitcoin, which is an increase of 5% since the last time the survey was conducted.

The survey was offered to just over 2,000 participants and found that awareness of bitcoin is remarkably high. Nearly nine in 10 out of every group had heard of bitcoin.

Over 40% of people believe bitcoin is a positive financial innovation. The survey was last conducted during the 2017 bull market, but this survey added more questions and found higher overall ownership and interest in bitcoin.

Confidence in the future of bitcoin is lower among the people polled. Less than half of all participants feel that bitcoin will be in everyday use within the next 10 years. Younger people felt the strongest about this, with 48% reporting that they agreed with the statement “it’s likely that most people will be using bitcoin in the next 10 years.”

Meanwhile, 27% of all people polled reported that they are likely to buy bitcoin within the next five years. This report follows a decline in the bitcoin price of more than 80%, which can be interpreted as a belief in the underlying fundamentals of cryptocurrency rather than the speculative potential of a bitcoin investment.

The bitcoin price is down 40% over the last 12-month period. | Source: Yahoo Finance

Most People Prefer Other Investment Instruments 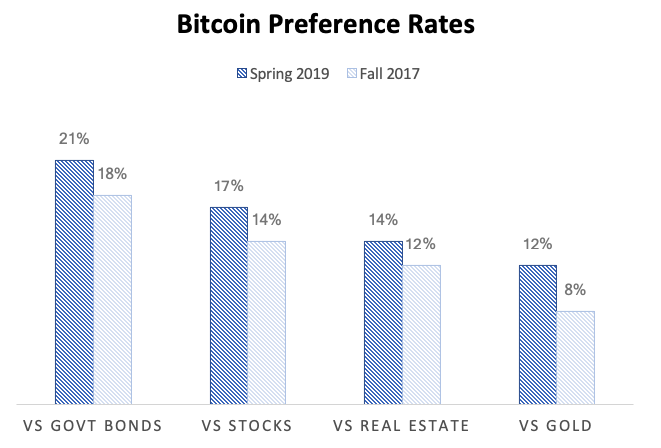 A new question on the survey was whether or not people owned bitcoin. Around 11% of all the people polled reported that they did. In fact, 2% of people over age 65 reported holding some BTC, while 16% of the youngest age group reported ownership. If this trend continues, ownership rates among Americans could increase to 30-40% within 10 years, being conservative with growth rates. As with all technological innovations, though, adoption is more likely to take off at a quickening pace, rather than a steady one.

“To help put the millennial proclivity to bitcoin in perspective: Only 37% of people under 35 are invested in the stock market — so the data point that 20% of those in the same group own bitcoin is particularly surprising.”

The survey data comes with the following caveat, however:

“All sample surveys and polls, whether or not they use probability sampling, are subject to multiple sources of error which are most often not possible to quantify or estimate, including sampling error, coverage error, error associated with nonresponse, error associated with question wording and response options, and post-survey weighting and adjustments. Therefore, the words “margin of error” are avoided as they are misleading.”

Which is vital to consider. If we can assume the figures are only 5-10% erroneous, however, the adoption rates of the present day are encouraging if nothing else.