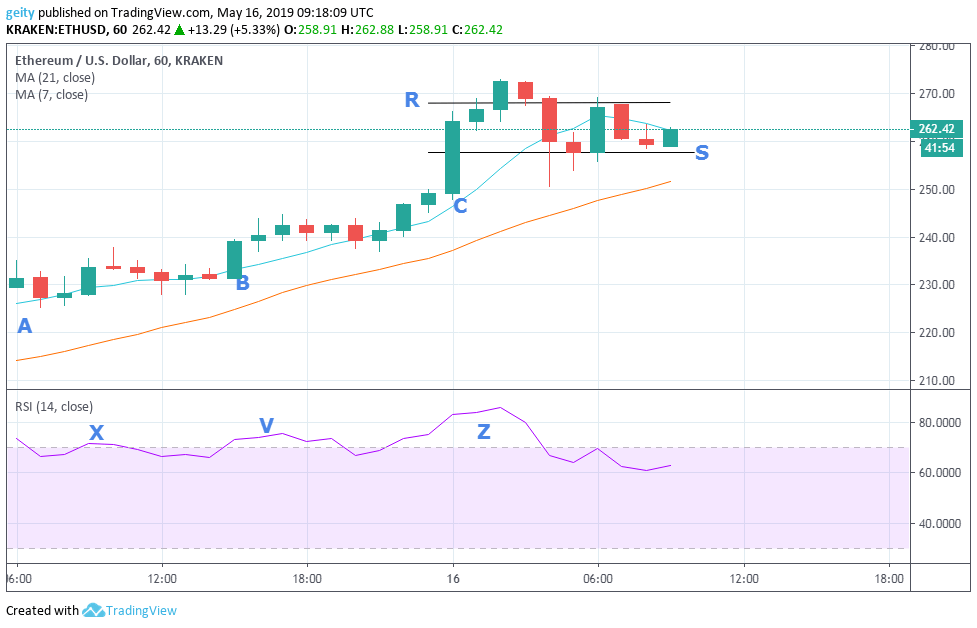 A bullish outlook is seen in the last 24hrs, this is confirmed by the moving averages which are moving side by side in an upward direction. The 7-day MA is seen above the 21day MA indicating bullish momentum. ETH/USD pairs started trading $231.55 (A). This was followed by a period of consolidation resulting in price rally moving in a sideways manner A to B.

The RSI is seen above 70 around X, V and Z indicating overbought market at those periods of time. Later on, the bulls manage to push the price a bit up to close at $239.28 (B) which was followed by a period of consolidation once again indicating luck of price momentum due to indecision in the market.

A three inside up Candlestick pattern appeared later on showing that the bulls rally and overtake the bears and pushed the price further up at (C) to close at $264.13. This placed resistance level at $268.09 and support level at $251.65. Resistance level was breached while the support level was tested severally. ETH is currently trading at $262.42; this shows that the price of ETH has increased thus increase sellouts is observed over the last 24hrs.

EOS/USD pair started the day trading at $6.0808 (A). Luck of market momentum is seen from A to B, but the bulls are seemed to be on the upper hand.

The RSI is seen above 70 at X indicating that the asset was overbought at that period of time. Later on, at (B) buyers drove the price further up to a high of $8.2000 but they encounter selling pressure that drove the price back down, for the period to close near to where they open (C).

The 21-day MA is seen to be crossing over the 7 day MA during the last hour, this indicates a bearish signal. The RSI is heading north at (Z) showing that a downtrend is likely to continue in the next few hours. New target should be placed at $6.0808 and stop-loss may be put into place slightly below or above the target before a breakout or a breakdown occurs. 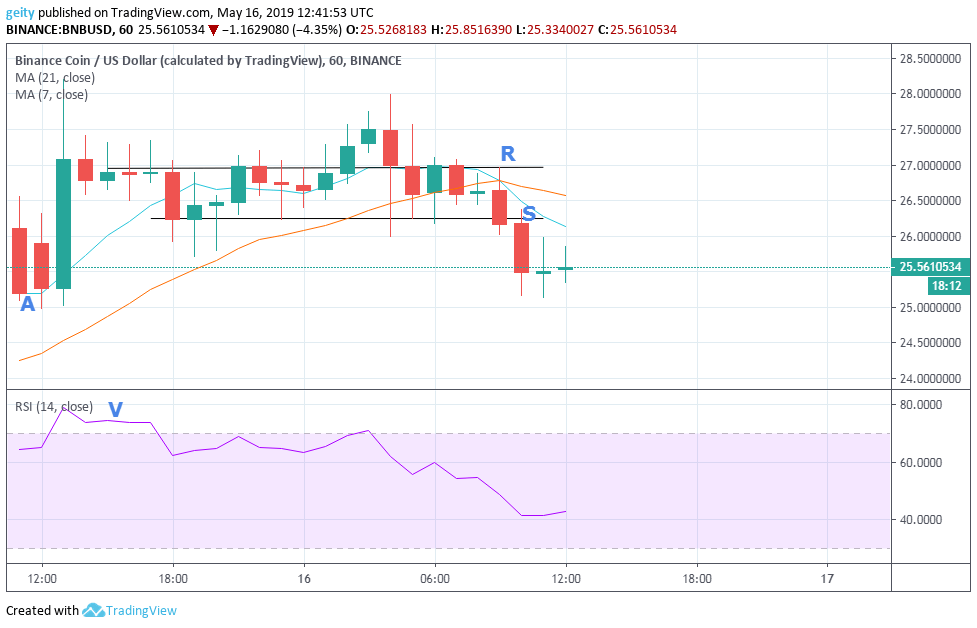 A bullish outlook is seen in the last 24hrs, the bulls are seemed to be up on their game. The day began with a bearish price rally where BNB started trading at $25.19190. The bulls, later on, managed to push the price up to close at $27.09166; this was signaled by the RSI (V) which was seen above 70 indicating an overbought market.

At that period of time indecision in the market was encountered for about 4hrs thus placed resistance level (R) at $26.96501. Traders later pushed the price down, placing support level (S) at $26.24737.

Resistance and support level was also tested and breached severally. During the last 3hrs the 21-day MA is seen to be above the 7 day MA indicating a bearish signal, this was followed by sellers pushing the price rally further down past support to a low of $25.17782. BNB is currently trading at $25.59308, this shows an increase in price thus increase sellouts.

The presence of a reversal pattern during the last hour signals bullish momentum. The RSI is also heading north, indicating an upward price rally in the next few hours. New target should be placed at $25.29040 while stop-loss should be set above support in case of a breakout.