Breaking News
By CCN: ‘Reported volume’ is the default metric that people look for when determining the ranks of crypto exchanges. ‘Reported’ and ‘adjusted’ volumes wildly differ on sites like CoinMarketCap.com. For example, if you look at the image below, you’ll notice a wild difference in “reported” and “adjusted” volumes at press time.

Ranking Exchanges Beyond Their “Volume”

Notice the difference between “reported” and “adjusted” volume on CoinMarketCap.com

ViewBase, a “market insights and community” platform centered around cryptocurrency, recently published a report which details other ways we might rank exchanges. Rankings could be based on real facts, like how much crypto they hold or the value of all their tokens combined.

The platform watches for large movements of various coins, including stablecoins, and provides traders the opportunity to discuss observations. It’s a bit like TradingView but crypto-centric.

Ranking exchanges purely by volume – reported or otherwise – may soon be a fallacy in and of itself, as the trend of “initial exchange offerings” gives rise to more “transaction mining.” Transaction mining is where users earn tokens for making trades; this may increase the volume but does it mean the exchange is more significant?

So ViewBase looks at three new ways to rank exchanges.

The first way is by ether balances. 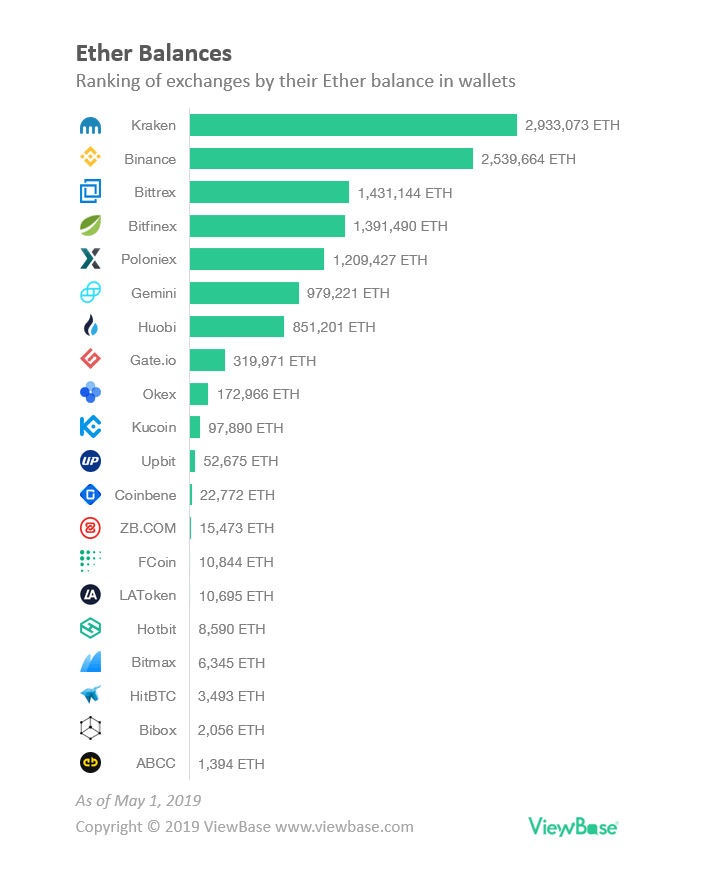 Kraken, with nearly 3 million ether, by far has the deepest pockets. Kraken’s volume in ether is interestingly currently ranked No. 98, with less than 1% of Ethereum’s alleged daily volume of more than $7.4 billion.

Kraken may have the most Ethereum, but they don’t do the most trading. Source: CoinMarketCap.com

Binance comes in second place by this method. Binance’s ETH/USDT market is 32nd in volume, with almost 1% of Ethereum’s daily trading volume, according to CoinMarketCap.

Binance Crushes With Help from BNB

The next metric ViewBase uses is the value of all ERC-20 tokens combined, which drops Kraken way down the list being that Kraken primarily focuses on fiat/major-cap markets.

Binance, however, gets a huge boost thanks to all its tokens. Huobi is right behind it. ViewBase writes:

“A vast majority of Initial Coin Offering (ICO) tokens are issued on the Ethereum blockchain, ranging from established projects like Omisego to the latest IEO tokens like Fetch.AI and Celer. Hence it is reasonable to expect the valuation of ERC20 tokens deposited on an exchange to be reasonably proportional to its reported trading volumes.”

The last metric is the value of all Ethereum and all tokens combined. 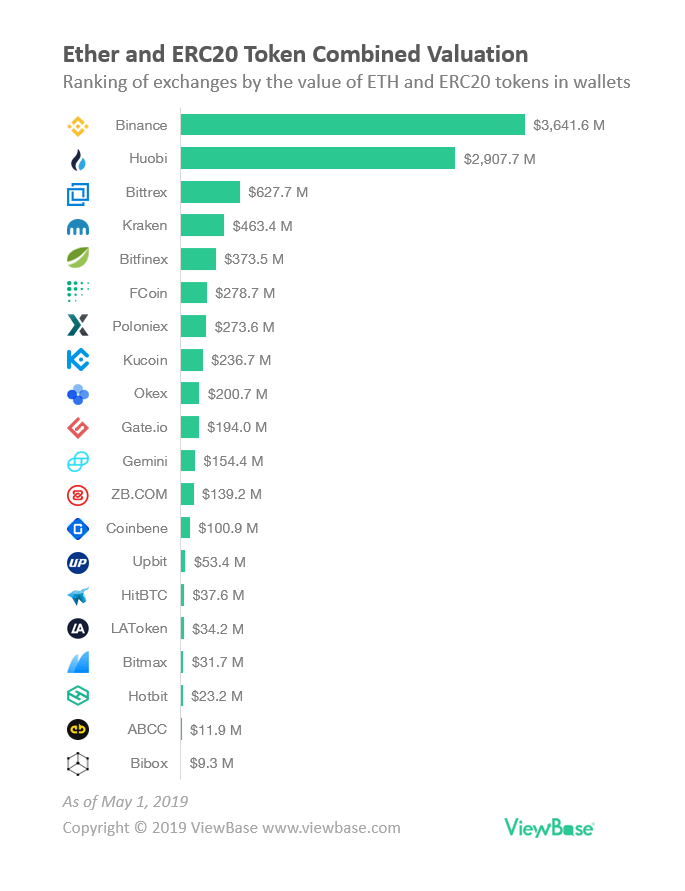 Binance has a massive lead when you combine its Ethereum and all of its tokens. A big part of this is the fact that its own Binance Coin (BNB), a routine top 20 cryptocurrency, is largely stored on the exchange for obvious reasons. Source: ViewBase

This chart surprisingly brings Kraken back into the top 5, but Binance remains king – by a long shot.

If we’ve learned anything from all the fake volume scandals over the past year, it’s that volume is not necessarily the best way to judge an exchange. While it’s an important metric, especially for traders who require a lot of liquidity, there is a lot more to exchanges than the number of times tokens change hands.

The actual crypto holdings of exchanges are perhaps the most exciting takeaway here. On the one hand, it’s a scary situation that a few places control that much crypto – “not your keys, not your crypto” comes to mind. On the other, it’s a real testament to the level of trust people place in these companies.