The bitcoin price surges by 17 percent in 24 hours (source: coinmarketcap.com)

The continuous rally of bitcoin led the valuation of the crypto market to spike from $211 billion to $242 billion, by more than $31 billion.

Major crypto assets in the likes of Ethereum’s ether, XRP, bitcoin cash, litecoin, and EOS recorded gains in the range of 8 to 20 percent, with XRP gaining 20 percent at the day’s peak.

Can the Bitcoin Rally be Sustained?

In one month, the bitcoin price surged by over 67.5 percent and as such, technical analysts expected the dominant cryptocurrency to experience a pullback.

However, the strong fear of missing out (FOMO) of investors in the global market supplemented by the drastic surge in the volumes of major exchanges like BitMEX and markets such as CME have further fueled the momentum of bitcoin.

“Trying to explain every market move with narratives is a recurrent behavioural mistake. Sometimes markets do move in response to events. Other times simply due to more aggressive buyers or sellers. This time however the magnitude of the move makes it worthwhile analyzing,” global markets analyst Alex Krüger said.

In the near-term, due to the sheer strength of the momentum of bitcoin and the general dismissal of negative events in the cryptocurrency industry by investors, bitcoin is expected to sustain its momentum. 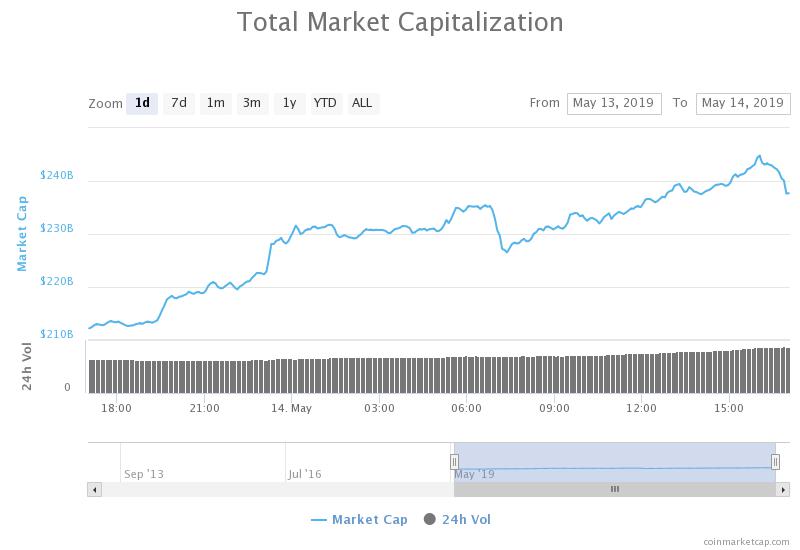 The valuation of the crypto market spikes by $31 billion on the day (source: coinmarketcap.com)

Speaking to the WSJ, Adrian Lai, a managing director at BlackHorse Group, said:

One key sign of crypto winter being over is you’re seeing the market isn’t really reacting to negative news.

Lai suggested that the intensifying conflict regarding trade between the U.S. and China may further demonstrate the merit of bitcoin to the mainstream and to the broader market of investors, raising the interest towards the market.

Previously, when the bitcoin price hovered at around $6,000, cryptocurrency researcher David Puell said that the bitcoin price trend is no longer parabolic but vertical, raising a strong possibility of the asset moving closer to $8,400.

“Price is not only parabolic, but vertical now. Shorts are still far from getting fully squeezed. $6.4k may activate longs from late trend traders, setting up the perfect blow-off top,” Puell said on May 9.

CME Bitcoin futures reached an all-time record high of 33.7K contracts on May 13 (168K equivalent bitcoin), up nearly 50% from the last record of 22.5K contracts on April 4. See how market participants are using $BTC to manage uncertainty: https://t.co/hDgraMj5pe pic.twitter.com/ct1xkjoJDF

As one trader said:

We are in a bull market again. This means you should keep some amount of BTC in your HODL stash at all times. If you think you can make more BTC selling it high and buying back low, do it with a small portion of your stack. Odds are, you won’t beat the market.

On the day, Ethereum showed a gain of 10.3 percent, nearing $210. XRP, the native asset of the Ripple blockchain protocol, spiked by 18 percent following a stagnant five months in the first half of 2019.

It remains to be seen whether bitcoin would continue to outperform most assets in the global market. Investors are expected to begin riskier selections in the near-term as the confidence in the market rises.